There are few roles in Hollywood that embody the action genre the way the Bond series has. And 55 years, 26 films, and seven actors later, we still haven’t seen the classic question answered: Who would play the best Jane Bond?

Just think for a moment – who in the world would play a female Bond best?  Certainly someone with confidence.  Someone smart.  Someone whose seduction prowess is turned up to 11, but at the same time not someone easily fooled by appearances.

Allow me to introduce you to Catherine Zeta-Jones STAY WITH ME.  I know she’s been out of the game a little while.  I know she’s married to the crypt keeper.  None of that matters.

Can you think of a better example of a woman with her crap together?  The darling detective of Europol, she walks among thieves with the bravado of someone who has mastered the finer parts of mischief.  Unquestioning, unrelenting, but still visibly vulnerable in the face of deep human connection (JUST LIKE JAMES BOND), Catherine Zeta-Jones shows tremendous potential to play the bristly but complex aspects of Bond.

Exhibit B: THE MASK OF ZORRO 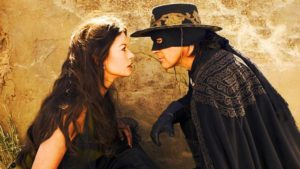 Come on.  If seduction is to play a factor at all in the character of James or Jane Bond, do we need to go over why this movie is a good point of reference?  I mean, her character is pretty damsel-in-distress-y and she didn’t do much with the knowledge of the fact she was Zorro’s daughter – she in fact made it a little weird by marrying the dude who picked up her dad’s vigilante hobby instead of adopting it herself, or just marrying some other guy who wasn’t wanted by literally every friend the governor of the state ever had, but DAMN, she’s hot, right?  And consider this quote by the late Roger Ebert, movie watcher extraordinaire, speaking of my girl Catherine while reviewing Ocean’s 12:

“I can only reflect, as I did while watching her in “The Mask Of Zorro,” that while beautiful women are a dime a dozen in the movies, those with fire, flash and humor are a good deal more scarce.”

She’s brash, she’s beautiful, she’s sharp, she’s a badass, and for what it’s worth, super British.

So, despite a fairly long spate of relative obscurity, Catherine Zeta-Jones could be poised to make an explosive silver screen reentry with the Bond franchise, should she choose.  She’s got the talent, the looks (rocking it even at 47), and the track record. THINK ABOUT IT.